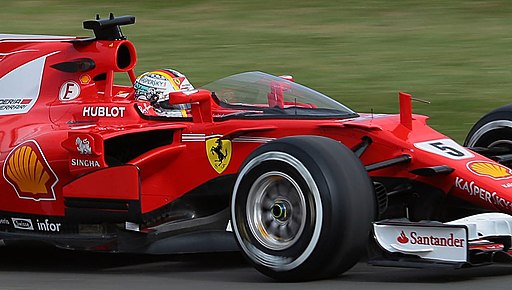 The winner was Sebastian Vettel, from Germany, undoubtedly the driver who left Silverstone happiest. He seemed to be driving a perfect car, a Ferrari, a car that was competitively fast. If a team has a car that is fast, then the team can easily make things happen, and this is where precision engineering comes into play.

Formula 1 (F1) cars must be redesigned by formula one teams, every season, to meet the latest regulations. Technology developed, during the redesign project, could be transferred onto everyday machinery; including cars that we drive every day. Some of the research, in a short time, is quickly applied to F1 cars which are then transferred on to road cars! It’s about doing the very best in precision engineering restricted by a set of rules which govern how F1 cars are built and every year those rules change; for example, in 2009 and 2017 the changes were massive.

The technical rules revolution of 2017 saw F1 cars becoming faster and broader. For this 2018 season changes have been relatively few in numbers; but, technology-wise, they are, and some will be very obvious indeed. One of the 2018 changes included: Drivers being allowed three rather than four power units, for the 21 race campaign, in a bid to make F1 power units (Engines) even more reliable,

One of the old rules dictates that an F1 car cannot burn through more than 100 litres of petrol per hour of driving. Now that is a lot of fuel! A half-hour drive would amount to delivery of 50 litres of fuel. The fuel system is a crucial system where it recovers fuel from the fuel tank and delivers it to the engine.

Did you know that Masterflex manufactures hoses to suit many automotive applications and supply them to its Formula 1 customers?

Should you require any further data on any of the hoses that we manufacture, please do not hesitate to contact our helpful Sales Team on 0161 626 8066 or email info@masterflex-uk.co.uk

You may also check out our website, for more options, at Masterflex-Hose.co.uk