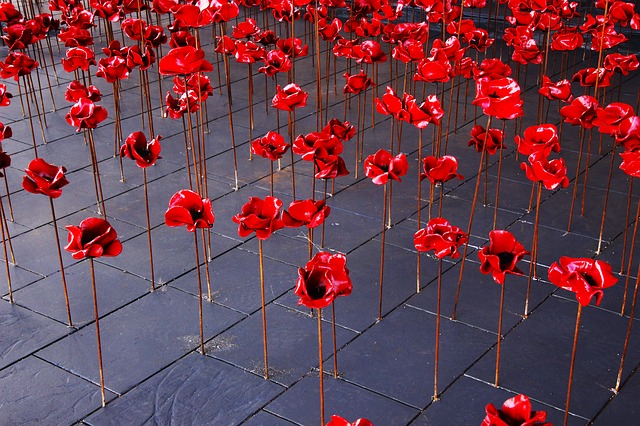 Remembrance Day, also known as Armistice Day, honours the signing of the armistice treaty in 1918 which earned four years of conflict to an end.

Germany and the Allies, in a railway carriage in the Forest of Compiegne in France, signed the treaty at 05:00. The guns fell silent along the Western Front in Europe, six hours later, at 11:00.

There will be a two-minute silence at 11 am on Sunday, like every year, as a tribute to those who lost their lives fighting for their country; it is for the nation to remember those who fought for our country and is, of course, a chance for us to understand and reflect the true meaning of this day:

Remembering those who have been killed in the first World War

This day is used to remember those who have been killed not just in the first World War, but also World War Two, the Falklands and the Gulf wars; as well as, those who died in the recent conflicts of Iraq and Afghanistan.

The Inspiration Behind the Paper & Plastic Poppy, A Symbol of Remembrance.

Poppy, A Symbol of Remembrance

A Canadian doctor (Lieutenant Colonel John McCrae), losing a friend in Ypres, was inspired by the sight of poppies growing in a battle-scarred field. Therefore, he wrote a World War One Poem “In Flanders Fields”, to value those who died. Remembrance Poppies, since 1921, are worn by millions of people, as a personal choice that reflects individual and personal memories. Real poppies were worn, initially, but now most flowers are made of paper and plastic.

A Bugle call, the “Last Post” is traditionally played to mark the start of the two-minute silence in Armistice Day memorials and the sounding of “The Rouse” or “Reveille” is followed at the end of the silence:

The Value of Remembrance Day

Remembrance Day is commemorated, differently, in various countries. Ireland and Scotland, the Remembrance Day, provides a very different impression. I.e. most towns and villages have ceremonies, for the expression of community, through a shared memory of what’s lost and not just for the justifications of wars. It is that understanding of community mourning that the wearing of poppies on TV or in football matches implores up.

Remembrance Day should not be merely a task, with the community, for us to remember; we should also assess, analyse, question and doubt in the confidence that recognising the disputes and killings will tell each new generation that we must live with each other in harmony. Furthermore, we must also show understanding and respect for the dignity and rights of everyone.

For more information on our product range contact Masterflex UK.